Thoughts and dreams are the foundation of our being. – Nigerian Proverb 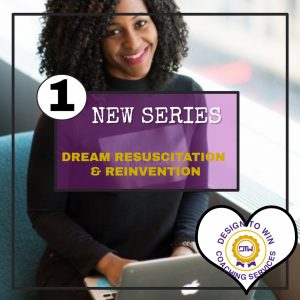 What do you do when your dreams are delayed? It was my 37th birthday and I did not quite know how to feel although it was my birthday. In fact, I had nothing planned and did not feel like celebrating. Besides, what was there to celebrate? I was only inching closer to 40 and I was still behind on my dreams and behind on my bills! The residue of the sting of failure and regret were still with me despite all my efforts at self-improvement. And had it not been for the memory of late bloomers like Zig Ziglar, Joyce Meyer, Brian Tracy, Terri Savelle Foy, Colonel Sanders, Grandma Moses and biblical characters like Sarah, Moses and Abraham, I would have sunken into a serious stupor of unabated despair.

I wish I could say that that was the last time I wrestled with the old dragon of regret and despair. It was not, but every time it reared its ugly head, the stories of those late bloomers and others like them pulled me from the clutches of that dangerous and awful dragon and this is what has led me to pen this book. I realized over the years that I am not the only one being lured into the clutches of this dragon and my aim is help as many people as possible to steer clear of this dragon so that they can go on to achieve their God-given purpose and destinies on their own divine timetable. 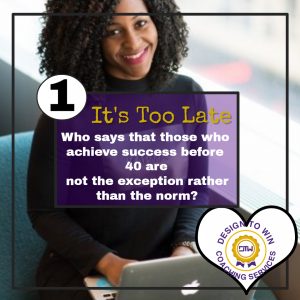 This series, “Dream Resuscitation and Reinvention” has emerged out of my own personal quest for hope and a desire to get beyond feelings of regret and personal failure. As young people many of us dream of the future and set deadlines to accomplish our important life goals especially those relating to marriage, children, owning our homes and starting our own family, all before the age of 35 and if not by then, certainly before the dreaded age of 40. I say dreaded because I’m always disturbed when speakers talk about the 40 year olds who are still struggling with things that according to them, they should have long ago overcome. It seems 40 is the number for maturity based on how they speak and if at 40 you have not achieved certain material things or matured to a certain level, then it seems impossible after that. At least that is how it seems judging by the way people speak!

But is it truly too late succeed after age 40? Can’t you get it right after 40?

Sure enough, I bought the lie for a season that I had to achieve my most important goals before age 40 or I would be a big failure! It was truly disturbing because although I have achieved much educationally and judge myself to be living on purpose, there are some ordinary things that have eluded me and at the time of writing, (38 years old] I still have not attained them. By this time I should have been Dr. Taylor. I should have had my house, my car, a husband and children with a fat bank account but alas I don’t. So what do you do when your dreams are delayed and many of your friends and schoolmates and even those younger than you are living your dreams?  What do you do when you are 40 years or older and your dreams have eluded you?

Who says people like Alexander the Great, Jesus the Christ, Martin Luther King, Malala Yousafzai, Mark Zuckerberg, Usain Bolt, Bob Marley and the like are not exceptions to the rule?  And by the way, is there a rule? Is there a rule for success or achievement of certain things by the age of 40? And if there is, who made it?

According to author Napoleon Hill, who studied for 25 years over 500 great achievers, in his book, “Think and Grow Rich” between ages 40 and 60 are our most productive years. If Hill is correct, by gosh I have not tapped into my most productive years yet! And if my life is spared, my most productive years are still ahead of me! Now, that sure is good news not just for me but for all those who will read this series. Since you are reading this article, it is not only good news for you but an assurance of hope for the future.  It’s Not Too Late!

In this series, you will revel in the stories of real people who defied the odds and achieved what was thought impossible after mid-life and even into their late 90s and after 100 years of age. These stories are not just ancient stories, although a few are included, but modern 21st century stories which have inspired me and give me hope as I grow closer to age 40, and am behind on some of my greatest dreams and behind on my bills. These stories will be a constant reminder that the best is yet to come!

It does not matter how old you are, if you are alive and fairly healthy, your dream is possible! This series will resuscitate those dreams which have been buried for a long time and will help you to reinvent your life with a new design to win. Let the dream resuscitation and reinvention begin!